One of my favourite places in the entire world is somewhere many aren’t even aware of. It is the crypt chapel in the Basilica of the Annunciation in Nazareth, Israel.

I’ve had the privilege to visit this church in Israel twice: once while on an educational leaders’ tour with some other Canadian leaders, and once as part of a Catholic Christian Outreach (CCO) staff pilgrimage. The Church of the Annunciation is built on the archaeological site of what is considered to be Mary’s home – Mary the mother of Jesus.

Why is Mary’s home one of my favourite places?

Oral tradition affirms that it was in Mary’s home that the Annunciation took place. It was here that the angel Gabriel appeared to her and announced the good news that she would conceive a child who would be called Emmanuel – God with us. 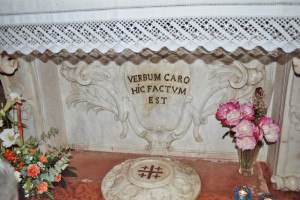 In the lower level of the Church of the Annunciation you can find the excavations and an altar in one of the rooms. As you can see from this photo, on the front of the altar is the Latin inscription, “VERBUM CARO HIC FACTUM EST” which translates to, “the Word of God became flesh here.”

Ponder that for a moment. “…HIC…”  —  “here.”  In this place, this very place, right “here”, the Word of God became human. All eternity was changed “here”, at this very place.

“At the time appointed by God, the only Son of the Father, the eternal Word, that is, the Word and substantial Image of the Father, became incarnate; without losing his divine nature he has assumed human nature…. The Incarnation is therefore the mystery of the wonderful union of the divine and human natures in the one person of the Word.” (479,483) 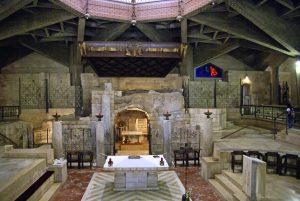 The first time I visited the site our group was permitted to celebrate a Catholic Mass in the crypt chapel and I sat just across from the altar. For me and other Catholics the celebration of the Mass is incredibly important. We believe that in every Mass Jesus is made truly present in the Eucharist. So during Mass, at that moment when the priest elevated the bread and the wine and prayed the prayer of consecration, I was completely awestruck at the wonder that Jesus, the Word of God, was becoming flesh “here” in the very place that the Word of God first became flesh and changed all of human history, and all of human destiny.

That’s the reason why this crypt chapel is such a wonderful place and is one of my favourite places in the world. It is amazing to be able to be present at the place where God took on our human nature.

What does the Incarnation have to do with Leadership?

In Letters to a Young Catholic, George Weigel, papal biographer and Catholic writer, coined the phrase: “the Catholic Difference.”  He suggests that one of the things that differentiates Catholicism from various religions is this Catholic Difference – a particular way of seeing the world. It’s an optic or lens for all aspects of life. And I believe this includes leadership.

What is “the Catholic Difference”?  Weigel writes: “You can describe it in many ways. You can call it the ‘Catholic both/and’: nature and grace, faith and works, Jerusalem and Athens, faith and reason, charismatic and institutional, visible and invisible” (Letters to a young Catholic p.10). The Catholic Difference is not an “either/or” approach; it is the “both/and” perspective. And it is a profoundly incarnational approach because the Word became flesh and dwelt among us without ceasing to be divine – God became human – in the person of Jesus.

This incarnational perspective can be applied by Christian leaders when they integrate the spiritual and human dimensions of their leadership. And this approach of being intentional in combining both spiritual and strategic elements is a way of leading that we at CCO have sought to practice for more than two decades. We call it: “Incarnational Leadership.”

As CCO leaders we continually strive to look to the Lord for a spiritual and prophetic sense. We discern His will. We desire in humility to listen to the Word of God. We seek to be attentive to what the Spirit is doing and to be aware of the signs of the times. Simultaneously, we are mindful of the importance of incarnating that Word, of being strategic. We articulate vision, make goals, plan objectives, devise strategies, work on organizational culture, have meetings, implement best business practices, and look for greater efficiency and effectiveness. We aim to take the very best of the spiritual and the prophetic and the very best of the human and the strategic – and meld them together in Incarnational Leadership.

A Unique way of thinking about Leadership 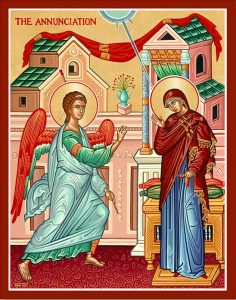 Incarnational Leadership is a unique way of thinking about leadership, particularly informed by a “Catholic both/and” perspective of the world. It’s not a technique or a strict formula, but rather a way of being that lives in both the practical and the supernatural.

For incarnational leaders, there’s a dynamic combination of these practical and supernatural elements. It’s a challenging, sometimes seemingly-paradoxical way to lead, especially within our highly technical and scientific culture. At times we may find ourselves tempted to separate these two elements but we must remind ourselves it’s not either/or. It’s both/and. Leadership should be both practical and supernatural; both ordinary and extraordinary; both prophetic and strategic; both human and divine.

Applying this approach would bring about a truly transformative experience for both those in leadership and in those whom the leaders are seeking to serve.

How are you living a truly Incarnational Leadership?