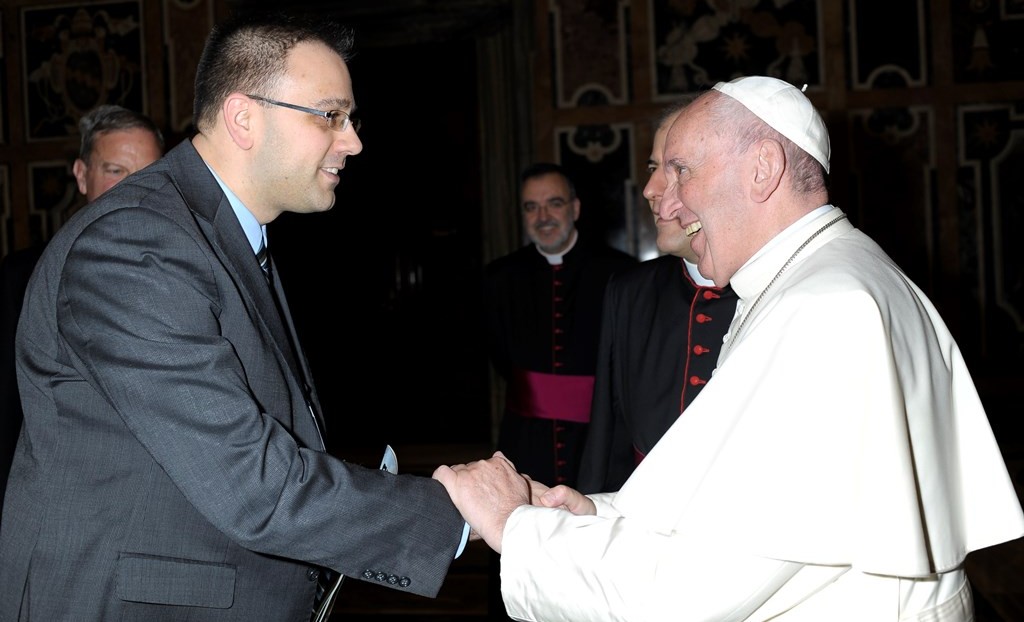 There it was on the schedule, February 24th, 2016: an audience with Pope Francis at noon. It was part of a two day conference organized by the Pontifical Council Cor Unum and being held at the Vatican. The occasion was a reflection on the tenth anniversary of Pope Benedict XVI’s first encyclical titled Deus Caritas Est – God is Love.

As I arrived that morning along with the other participants, there was certainly a buzz in the conference hall. However as we began the morning session one of the Vatican officials moderating the conference gave us some potentially bad news. “When we meet the Holy Father today, we are not sure what will happen. Yesterday he was sick with fever and had to cancel his audiences. So we may or may not have the opportunity to greet him each personally. Also our group is quite large so we will just have to wait and see.”

At this point I didn’t want to get my hopes up too much. I have never before had the chance to greet a Pope, although 16 years ago I did sit about 50 feet from Pope John Paul II at the Opening Ceremony for World Youth Day in Rome. In any case, I tried to tell myself it would be very special just to see him and hear him speak in person. But of course it’s hard to suppress one’s hopes.

Later that morning as we made our way to the Clementine Hall, where the Pope tends to hold his private audiences, the anticipation was building. I was near the front of our group of just over 200 people as we entered the room. The Cardinals and Bishops had reserved seats on the left and they made up about 40 people. We were seated on the right and as it would happen, I found a seat right in the second row. I was excited to be so close to the action and I thought that if the Pope did take the time to greet some people, maybe my odds would be higher being closer to the front.

As the room filled the Vatican officials came over and told us in the second row that they needed our row for special guests and speakers at the conference. They said we would need to move. We politely, although reluctantly, got up only to discover that a lot of the seats behind us had now been filled by everyone else.  Feeling a bit deflated, I moved and was able to find one seat on the outside about seven or eight rows back.

Our audience was at noon, but the Holy Father arrived about ten minutes after. There were a few short presentations including one by the Holy Father himself. It was quite extraordinary to be in such an intimate setting with the Successor of Peter. After he finished speaking, people were invited to greet him. There is a protocol to this:  it begins with the Cardinals, then the Bishops, then the conference presenters and other dignitaries, then everyone else if time permits. The Pope seemed quite joyful and at times had extended conversations with a number of the Bishops and conference presenters. As I watched them, my anticipation heightened. Would the rest of us get a chance to greet him?

I tried looking for indications: how much time might we have left? What were the ushers doing? All the while I was trying, with modest success, to reassure myself that just being there was a privilege. Kind of like a potential award-winner at the Oscars: “It’s an honour just to be nominated.” But of course you hope that you are the winner!

At one point it looked like they had cut things off – not to be unexpected, as we’d been told. But then, it appeared that the Pope must have made some indication and they started bringing more people forward. Row by row they went up, were introduced and made a brief greeting. It seemed like an eternity as I sat in the back waiting for my row, wondering if we would run out of time before they got to me.

As the rows drew nearer to mine I began to think about what I would say, recalling that he didn’t understand English very well so I needed to be brief and simple. I remembered that I had brought some CCO materials with me. I decided to give a copy of our recent newsletter, The Grapevine, and the Encountering Mercy booklet which CCO made for this Jubilee Year of Mercy. I took them out and a few minutes later we were directed to stand up to take our place in line. I quickly handed my phone to a friend who was seated in a row ahead of me and asked him to take some photos.

The line seemed to move extremely slowly but likely it was quite fast. When my turn came I was greeted with his smile and respectfully kissed his ring. I was introduced and I said, “I work in university evangelization in Canada and I have six children.” Why did I say that? I guess these were the things most on my heart at that moment. I showed him a copy of The Grapevine. As I handed it to him you could see his expression light up at he looked at the young adults on the cover. We stood for a moment smiling face to face, and then shook hands again and it was the next person’s turn.

My friend handed me back my phone and I immediately sent out a tweet with a photo. I felt that I had been representing all those involved with CCO and I wanted them to be able to share in the moment. I continued to watch the rest of the conference group go and meet the Holy Father. Everyone returned with great smiles on their faces. The very last people presented that day were the staff working at the Vatican who clearly also were really encouraged by this encounter. In the end, he had personally connected with every single one of the more than 200 people in the Audience Hall. He greeted each individual with keen attention and a joyful disposition – like he was greeting a friend. To conclude, the official Vatican photographer took a group photo, the Pope gave a few more waves and then was off to his next meetings.

On the way out of the Audience Hall I reflected on the extraordinary generosity of Pope Francis. Just the previous day he had been ill, yet he went out of his way on this afternoon to ensure that not one person would be excluded.  Dr. John Maxwell wrote in The 21 Irrefutable Laws of Leadership (in the chapter titled, “The Law of Connection”) that a leader should “touch a heart before they ask for hand” and they should always seek to “walk slowly through a crowd”. While often a leader has many things that they need to do, at the heart of virtuous leadership is a generosity of presence with people.

Pope Francis’ personal motto is Miserando atque eligendo (Latin for “lowly but chosen” or more literally, “by having mercy, by choosing him”). It is taken from the 21st homily of the Venerable Bede on Saint Matthew’s Gospel relating to his vocation: “Jesus saw the tax collector and by having mercy chose him as an Apostle saying to him: Follow me.”

Throughout his Pontificate, Pope Francis has gone out of his way to be generous with his presence with people. I believe this is an extension of a grace that he feels he personally received from God – to be called, to be chosen, despite being lowly or someone of low standing. That afternoon, he offered that same grace to every one of us present at the audience. As the leader of 1.2 billion Catholics worldwide, I am sure that there may have been many other important things that  he could have been doing. But that day he chose to be personally present to each one of us. It was a true act of generosity and leadership for which I am deeply grateful. 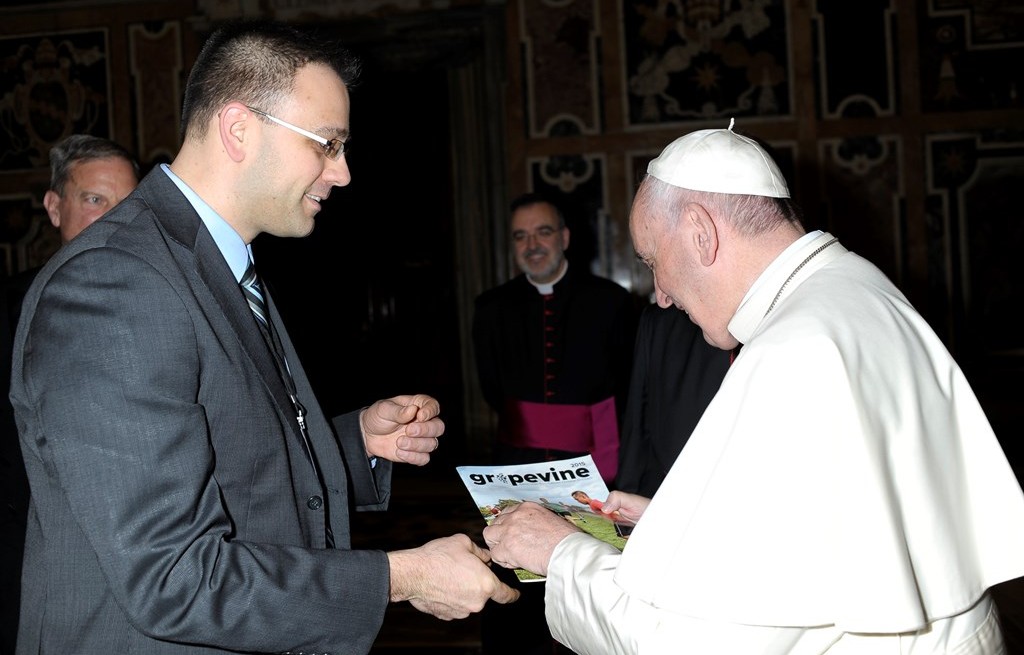 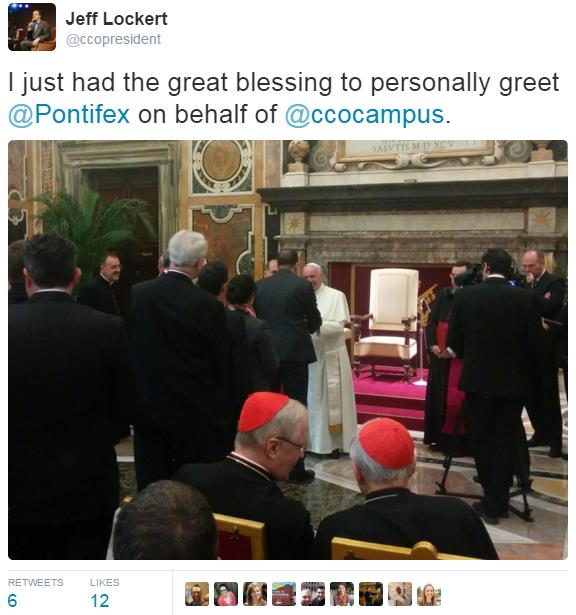 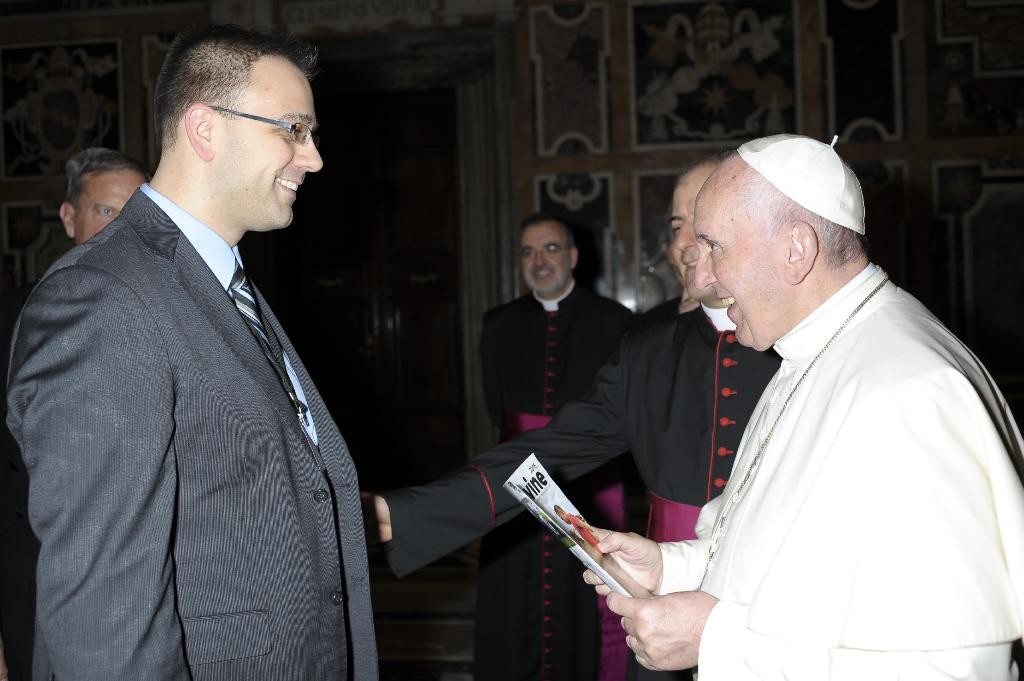