There are many people who have great ideas and a vision to achieve something. Yet countless times, plans fall by the wayside, visions go unrealized, good ideas never get off the ground. Perhaps you have experienced this. Perhaps you had a vision for something but it never was fulfilled.  What was this vision? What happened?

Why do dreams fail and visions go unrealized?  The answers are varied and in some ways complex, but many times, it can boil down to a problem in execution. While there exist many books and seminars related to management techniques and strategic planning, training and information related to execution is significantly lacking.

What exactly is execution? Authors Larry Bossidy and Ram Charan answer the question in the title of their book: “Execution: The discipline of getting things done.” While they outline numerous important principles related to this topic (and for any serious leader, this book will be a huge resource), execution can also be considered in light of the Christian belief in the Incarnation.

Fundamentally, the Incarnation is the most profound example of execution. God had a major leadership challenge before Him. The people He created had chosen to sin, which created an eternal separation between God and the people He loved. In God’s wisdom, He envisioned a plan to restore this relationship by sending the second person of the Trinity to earth to become a man. This mystery of the Incarnation is central to our faith because as the early Church Fathers wrote: ‘What has not been assumed cannot be redeemed.” Since Jesus completely assumed human nature, it has been completely redeemed.

In January of 2009, I had the opportunity to visit Israel and walk in the footsteps of Jesus. One of the most profound places I visited was the Basilica of the Annunciation – a Church built on the place that, according to tradition and archaeological research, was Mary’s home, the place where the Angel Gabriel visited her. It is in this place that the Incarnation occurred, where the Word became flesh, where the God of the infinite became finite, where Jesus was conceived as a human person. In the lower chapel built around the excavation of Mary’s home, there is an altar on which a Latin phrase is inscribed: Verbum Caro Hic Factum Est. It means “The Word became flesh here.”

Visiting the place where the Word became flesh was a very moving experience for me, because I realized the significance of God’s work of execution. If God’s idea, his plan for the salvation of humanity had remained simply a plan, an idea, a hope, we would still be eternally separated from God by our sin. Without the Incarnation, there would be no crucifixion or resurrection. The Incarnation is the execution of God’s plan: the Word became flesh. 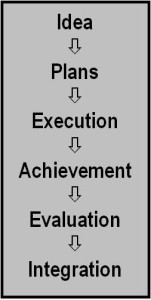 “To understand execution, you must keep 3 things in mind:

What positive results of execution have you seen in your organization or a group you belong to? What obstacles have you encountered in execution? What can you do to overcome these obstacles?

Think about your own “discipline of getting things done.” In what ways can you improve? Make a list of the projects or tasks that have been assigned to you and when they are to be completed by. Put a check mark beside the ones that you are executing well. Put a question mark beside the ones you are uncertainty about or that aren’t going well. Think of some ways to improve these and invite a mentor skilled in execution to help you to “get things done.”