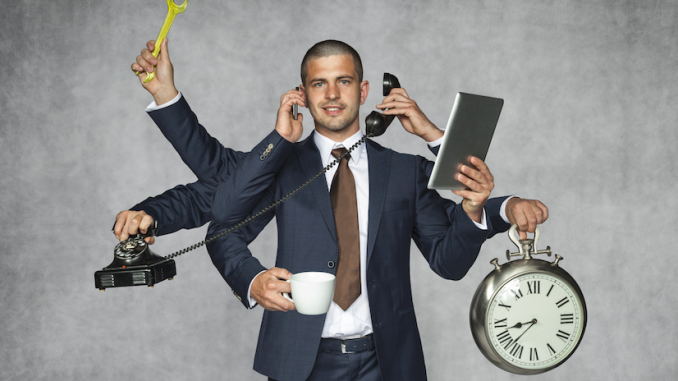 A few months ago, I saw an article on Forbes.com titled “15 Surprising Things Productive People Do Differently” written by Kevin Kruse.

It caught my attention, both because of the topic and the people he interviewed to find out their “number one secret to productivity”. As I read the list, I was both inspired and affirmed. Many of the points were already habits I have put in place in my life and from which I have seen great benefit.

I’d love to comment on each one of them, but let me touch on just three, and how they have helped me.

In the past, I certainly have used to-do-lists and I have found them useful, but as my time management habits have matured, I focus solely on my calendar. When there is something I want or need to do, it will always require time. So instead of transferring it from my head, to a list, and then to my calendar, why not cut out the extra step and just put it directly into the calendar?

My personal mission statement and values are generally in my mind (formed through good habits of  weekly planning), so I try to make an immediate decision whether I should do something or not. If I should, I put it immediately into my calendar making my best guess as to when I should do it and how much time it might take. It might be right away, next week, month, year… but it it immediately goes into my calendar, and of course I can move it to a different time if needed. No to-do-lists!

Secret #6: They use a notebook.

While I appreciate the digital tools I use, I still use a paper notebook, and generally it is my catch-all for many items. I take notes from meetings and presentations in it. I scribble down ideas in it. I sometimes draw diagrams or sketch plans. I use it to draft priorities. I capture as much as I can in it.

I try to always remember to date my entries so I can go back in sequence to find what I wrote. In fact, I still have all my personal notebooks dating back more than 15 years! There is something powerful about writing things down and something even more powerful about having it all in one place. It’s a storehouse of creativity and productivity that never needs batteries.

Secret #11: They delegate almost everything.

Whenever there is something to be done I have developed the habit of always asking myself, “who else can do this?” Some might think I am just lazy, but in fact its the exact opposite. I know that I have limitations, both in terms of time and talent. But if I can multiply my effort by working through others, especially in areas that they are talented and passionate, for me that’s a huge win-win, and tremendously productive.

I am not always perfect at delegating, and certainly have times where I don’t delegate as much as I should. And certainly it’s important to avoid dumping things on others. But by forming a habit of working through others, so much more can be done, and often done much better.

So there are my three of my highlights. To be a prudent leader is to be wise in the use of your time, your energy, and your talents. Virtuous leaders want to be productive because they want to activate and focus the very best of themselves, and the very best in others, towards excellence and greatness.

Of these fifteen secrets, what is one you already practice and one would like to apply in your life and leadership?

I recently interviewed over 200 ultra-productive people including seven billionaires, 13 Olympians, 20 straight-A students and over 200 successful entrepreneurs. I asked a simple, open-ended question, “What is your number one secret to productivity?” After analyzing all of their responses, I coded their answers into 15 unique ideas.

Secret #1: They focus on minutes, not hours.

Average performers default to hours and half-hour blocks on their calendar. Highly successful people know there are 1,440 minutes in every day and there is nothing more valuable than time. Money can be lost and made again, but time spent can never be reclaimed. As legendary Olympic gymnast Shannon Miller told me, “To this day, I keep a schedule that is almost minute by minute.” You must master your minutes to master your life.

Secret #2: They focus only on one thing.

Ultra productive people know their Most Important Task (MIT) and work on it for one to two hours each morning, without interruptions. Tom Ziglar, CEO of Ziglar Inc., shared, “Invest the first part of your day working on your number one priority that will help build your business.” What task will have the biggest impact on reaching your goal? What accomplishment will get you promoted at work?

Throw away your to-do list; instead schedule everything on your calendar. It turns out only 41% of items on to-do lists are ever actually done. And all those undone items lead to stress and insomnia because of the Zeigarnik effect. Highly productive people put everything on their calendar and then work and live from that calendar. “Use a calendar and schedule your entire day into 15-minute blocks. It sounds like a pain, but this will set you up in the 95th percentile…”, advises the co-founder of The Art of Charm, Jordan Harbinger.

Your future self can’t be trusted. That’s because we are “time inconsistent.” We buy veggies today because we think we’ll eat healthy salads all week; then we throw out green rotting mush in the future. I bought P90x because I think I’m going to start exercising vigorously and yet the box sits unopened one year later. What can you do now to make sure your future self does the right thing? Anticipate how you will self-sabotage in the future, and come up with a solution to defeat your future self.

Secret #5: They make it home for dinner.

I first learned this from Intel’s Andy Grove, “There is always more to be done, more that should be done, always more than can be done.” Highly successful people know what they value in life. Yes, work, but also what else they value. There is no right answer, but for many, values include: family time, exercise, giving back. They consciously allocate their 1,440 minutes a day to each area they value (i.e., they put it on their calendar) and then they stick to the schedule.

Secret #6: They use a notebook.

Richard Branson has said on more than one occasion that he wouldn’t have been able to build Virgin without a simple notebook, which he takes with him wherever he goes. In one interview, Greek shipping magnate Aristotle Onassis said, “Always carry a notebook. Write everything down…That is a million dollar lesson they don’t teach you in business school!” Ultra-productive people free their mind by writing everything down.

Secret #7: They process email only a few times a day.

Ultra-productive people don’t “check” email throughout the day. They don’t respond to each vibration or ding to see who has intruded their inbox. Instead, like everything else, they schedule time to process their email quickly and efficiently. For some that’s only once a day, for me, it’s morning, noon and night.

Secret #8: They avoid meetings at all costs.

When I asked Mark Cuban to give me his best productivity advice, he quickly responded, “Never take meetings unless someone is writing a check.” Meetings are notorious time killers. They start late, have the wrong people in them, meander in their topics and run long. You should get out of meetings whenever you can, hold fewer of them yourself, and if you do run a meeting, keep it short.

Secret #9: They say “no” to almost everything.

Known as the Pareto Principle, in most cases 80% of outcomes come from only 20% of activities. Ultra-productive people know which activities drive the greatest results, and focus on those and ignore the rest.

Secret #11: They delegate almost everything.

Secret #12: They theme days of the week.

Highly successful people often theme days of the week to focus on major areas. For decades I’ve used “Mondays for Meetings” and make sure I’m doing one-on-one check-ins with each direct report. My Friday afternoons are themed around financials and general administrative items that I want to clean up before the new week starts. I’ve previously written about Jack Dorsey’s work themes, which enable him to run two companies at once. Batch your work to maximize your efficiency and effectiveness.

Secret #13: They touch things only once.

How many times have you opened a piece of regular mail—a bill perhaps—and then put it down only to deal with it again later? How often do you read an email, and then close it and leave it in your inbox to deal with later? Highly successful people try to “touch it once.” If it takes less than five or ten minutes—whatever it is—they’ll deal with it right then and there. It reduces stress since it won’t be in the back of their mind, and is more efficient since they won’t have to re-read or evaluate the item again in the future.

My single greatest surprise while interviewing over 200 highly successful people was how many of them wanted to share their morning ritual with me. Hal Elrod, author of The Miracle Morning, told me, “While most people focus on ‘doing’ more to achieve more, The Miracle Morning is about focusing on ‘becoming’ more so that you can start doing less, to achieve more.” While I heard about a wide variety of habits, most people I interviewed nurtured their body in the morning with water, a healthy breakfast and light exercise. They nurtured their mind with meditation or prayer, inspirational reading, and journaling.

Secret #15: Energy is everything.

You can’t make more minutes in the day, but you can increase your energy which will increase your attention, focus, decision making, and overall productivity. Highly successful people don’t skip meals, sleep or breaks in the pursuit of more, more, more. Instead, they view food as fuel, sleep as recovery, and pulse and pause with “work sprints.”

Tying It All Together

You might not be an entrepreneur, Olympian, or millionaire—or even want to be—but their secrets just might help you to get more done in less time, and help you to stop feeling so overworked and overwhelmed.